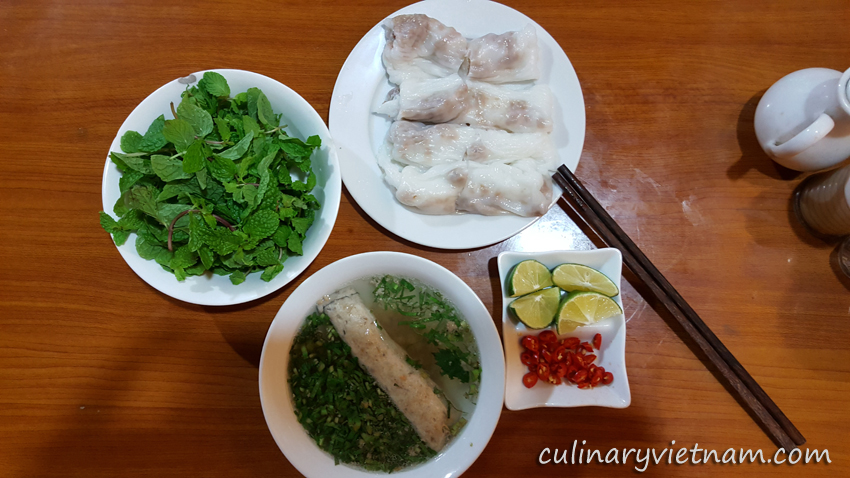 Vietnamese Food Culture, Where to eat in Vietnam

Cao Bang Rice Rolled Cakes (Bánh cuốn Cao Bằng) are favored versions of the rolled cakes that become delicacies right in the center of Hanoi City. Originated from Cao Bang Province, but these rolled and stuffed cakes have the firm positions on the Hanoi cuisine maps. It’s highly enjoyable to savor the food of the highland in the bustling cityscape and feel the differences.

In almost every talks about Cao Bang food, people are likely to think of the highland specialties such as mushrooms, wild honey, Trung Khanh chestnuts, buffalo meat, dried bamboo shoots, etc. And now, it’s great to know the rolled cakes which are the unique dishes of the Tay hill-tribe group. In the highland, the Tay people only make these rolled dishes during the festive periods, Tet Festival, family gathering, or greeting the valued guests. But in Hanoi City, foodies just come to the “Banh Cuon Cao Bang” eatery and enjoy the yummy rice flour cakes stuffed with the mushroom and minced pork. The delicacy of the highland becomes easily accessible in the cityscape and enchants many food connoisseurs.

According to the local chefs, Cao Bang Rolled Cakes should be eaten with the pork bone broth including the fermented wild bamboo shoots and chili. The sour and sweet taste of the broth can mesmerize you. Another way to savor this delicacy is to eat with chicken egg and dip the set in the well-spiced sauce. Both smell and taste of the dish are attractive. This way, when spreading the batter over the steaming basket, people will add a chicken egg to the batter, and then cover the cooked egg with the rice sheet.

Sets of Cao Bang Rolled Cakes have been present on Hanoi food culture menu that calls for the international foodies’ interest. The rolled rice flour cakes combined with the pork bone broth are the mouth-watering sets during your city explorations of Hanoi street food. The transparent-looking cakes give delight to all senses while the nutrient broth creates the differences.

In the Alley 223 To Hieu (Cau Giay, Hanoi), an eatery named “Banh Cuon Cao Bang Ba Dung” is often packed with the Hanoians and some expats. You might need to wait for minutes to receive the appetizing rolled cakes, and the bowl of the nutrient broth steamed from the pork bones. And, the difference lies in the fact that Hanoi’s authentic rolled cakes are served with fish sauce, while the Cao Bang’s are enjoyed with the pork bone broth. The rolled cakes of the highland are the ideal choices for your Hanoi food tour.

Food in Hanoi is plenty, but make sure you have time for the delicious and authentic Cao Bang Rolled Cakes. Here are some of the good places to eat the authentic delicacy of the highland:

For those that fall in love with the second-to-none rolled cakes when they visit Cao Bang, it’s great that now they can eat these cakes in Hanoi City. The suggested addresses promise to be the right eateries to eat the authentic Cao Bang Rolled Cakes whose tastes are as authentic as the ones in the highland. Do not need to go far or elsewhere to eat the fantastic food of the highland because Hanoi has it. The Hanoi’s cultural and cuisine spectacle is rich and diverse enough to offer most of what you want to relish, particularly the rolled cakes of Cao Bang (Bánh cuốn Cao Bằng)!