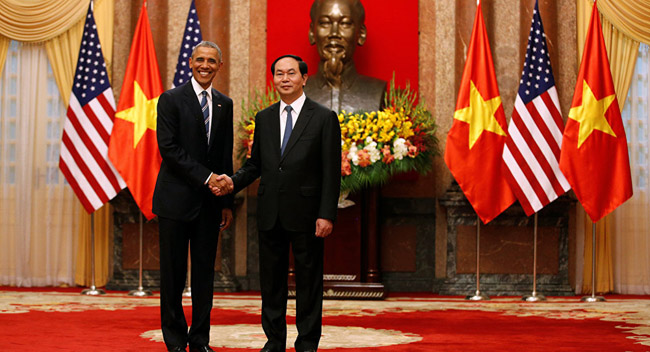 President Barack Obama is visiting Vietnam for a series of meetings with officials to deepen U.S. ties with Vietnam via the new economic and security initiatives. Not to mention the big and governmental issues, many individuals just want to know what Vietnamese authentic dishes that Mr. Obama eats during his Asian historic trip in Vietnam. Here are for your concerns.

To ensure that Mr. Obama could delight his palate on the Vietnamese foods, the menu to serve the U.S. President at this time was well-prepared in the royal style. Right in the Presidential Palace of Vietnam, Hanoi, Obama was well fed with the big welcome party. It was reported that the menu included some of the Vietnamese authentic dishes:

According to the expert, who created the menu to treat President Obama in Vietnam, the welcome party aimed to introduce the highlights of Vietnamese cuisine and also ensured the President to eat delightfully. They tried to mix a few European culinary traits with the Vietnamese ones to meet with the President’s possible flavor.

On May 23, 2016, President Obama announced that the U.S. would lift the decades-long ban on the sales of military equipment to Vietnam; then, Obama had a Hanoi traditional meal with the celebrity chef Anthony Bourdain at Bun Cha Huong Lien restaurant, Hanoi. The two enjoyed the “bún chả” dinner much, and it was interesting to know that Obama’s “chopstick skills are on point.” shared on Instagram Monday of Bourdain. Yes, we all know that he is the greatest and most powerful man.

The image of the grilled pork patties in a bowl of fish sauce served with vermicelli noodles, herbs, and lettuce is appealing to almost every foodie. In fact, “ bún chả ” is one of Hanoi’s most traditional dishes that contribute to the northern Vietnamese cuisine.

The celebrity chef also shared that he paid the bill of $6 meal (include Hanoi beer). The price was low, and the quality of food was excellent. Their meal and talk will soon appear in September episode of “CNN’s Anthony Bourdain Parts Unknown.” It was truly the incredible news to share with the whole world.

After Hanoi, President Obama would spend two days (May 24 & 25, 2016) in Saigon (the former name of Ho Chi Minh City). Admittedly, Saigon is internationally famous for a wide range of the delicious and unique food in both the 5-star restaurants as well as the bustling street stalls. Saigon itself is the giant eatery in which the appetizing food of the three regions of Vietnam is assembled.

Therefore, if Mr. Obama agreed to stop by the eateries in Saigon, he would be assured to take delight in eating the Saigon’s traditional dishes. The must-eat options are Saigon broken rice served with grilled pork, omelet or sausage, the crispy pancake, the nutrient vermicelli broth, the yummy “Bò Lá Lốt”(the grilled beef wrapped in betel leaves), Quang noodle,  etc. Yes, it was our respected Obama’s choice to savor any of the delicacies of Saigon. Whatever his choice, the Vietnamese restaurants take pride in welcoming him all the time.